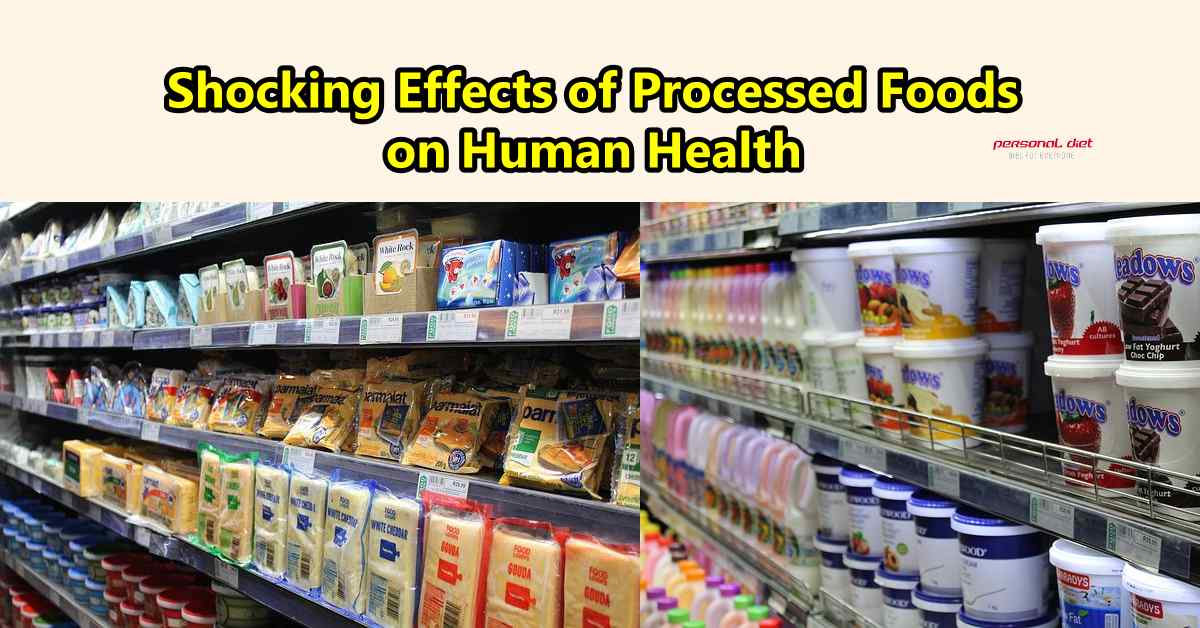 Processed foods have long been known to have adverse effects on human health, with the Centers for Disease Control and Prevention reporting that about half of all American adults (50.5%) are obese and another 34% are overweight or obese.

In addition to causing weight gain, processed foods may contribute to other serious health problems, such as cancer, heart disease, and Alzheimer’s disease.

Here are the shocking effects of processed foods on human health…

Adipose tissue surrounds our organs and plays a key role in many bodily functions. Excess body fat is stored in our torso, and men tend to store it in their abdominal cavity.

This visceral fat surrounds your vital organs and is metabolically active. That means it produces hormones and pro-inflammatory proteins that can increase your risk for heart disease, diabetes, cancer, and other chronic illnesses.

Processed meats are responsible for more deaths than all types of illicit drugs combined. Research suggests that sodium nitrite (found in many processed types of meat) can damage blood vessels and decrease blood flow to vital organs like your heart and brain.

It’s no surprise then those cardiovascular diseases cause one out of every four deaths in America each year—but they can be avoided by following a natural diet with less salt and more essential nutrients like omega-3 fatty acids and antioxidants.

Eating certain processed foods can trigger addiction in your brain. When you eat foods high in sugar, they send a rush of dopamine to your brain’s pleasure center, causing an intense feeling of reward.

Over time, your brain becomes less sensitive to those pleasurable feelings and requires more and more processed food for satisfaction—which can lead to overeating and overweight.

One study found that participants who drank sugary drinks experienced even greater cravings for junk food when exposed to images of junk food.

The study showed that people who added sweetened drinks had increased activity in their striatum (in charge of our cravings), as well as diminished activity in their frontal lobe (responsible for decision-making). read more about Effects of Processed Foods..

The foods we consume affect our brain chemistry. Recent research reveals a correlation between diet and serotonin, a neurotransmitter that affects mood, sleep, memory, and social behavior.

Researchers have found that high-glycemic foods (e.g., processed carbohydrates) can lead to compulsive overeating because they trigger surges in insulin levels followed by sharp dips in blood sugar.

This roller coaster ride causes cravings for more carbohydrates and subsequent overconsumption, as well as increased appetite-related hormones like ghrelin, which makes us crave carbohydrates even more.

High-fructose corn syrup and monosodium glutamate, a.k.a. MSG, are ingredients found in processed foods that do nothing but make food taste delicious, right? Wrong.

These ingredients are linked to obesity, diabetes, and mood disorders like depression and anxiety—and they could be harming your health even more than you thought.

For example, research shows that women who consume high levels of MSG over time may be more likely to develop depression compared with those who consume less of it; other studies show an association between eating food with high-fructose corn syrup and weight gain in children and teens as well as an increased risk for type 2 diabetes in adults.

The takeaway: You’re better off sticking to whole foods instead of processed ones whenever possible.

The effect of processed foods like refined sugars, high-fructose corn syrup, and hydrogenated oils are well documented when it comes to their effects on obesity, diabetes, and cancer.

The first two conditions can be fatal while cancer is one of the leading causes of death in developed countries today.

All three diseases are linked to unhealthy diets heavy in processed foods and low in natural nutrients. It is also noteworthy that these diseases aren’t just affecting adults; childhood obesity has reached an all-time high with an estimated 17% (6 to 9-year-olds) being obese as a result.

People who eat a lot of processed foods may be more likely to develop autoimmune diseases such as celiac disease, inflammatory bowel disease, and multiple sclerosis.

A study in 2011 found that between 2 and 6 percent of people in Spain were allergic to wheat — before changing their diet.

After cutting out wheat, that number dropped by 50 percent. Processed foods also often contain gluten — a protein found in wheat and grains that trigger inflammation in some people with autoimmune diseases.

And not only can processed foods trigger an immune response, but they can also impact your body’s ability to fight infection — potentially leaving you vulnerable to illnesses like colds or flu.

There are a lot of studies connecting processed foods to depression and anxiety. This is due in part to things like trans fats and high fructose corn syrup, which have been linked to an increased risk for neurological diseases.

Additionally, eating fatty processed meats has been shown to increase feelings of anxiety—both by contributing to inflammation in your body and by damaging your gut flora, which is responsible for producing feel-good neurotransmitters like serotonin.

Although you may be consuming fewer calories overall when eating packaged foods, those empty calories can cause weight gain.

Running VS Skipping For Weight Loss?

Plus, a study published in the Journal of Obesity reveals that people who ate high-fructose corn syrup—found in most processed foods—were more likely to experience metabolic disorders like insulin resistance or nonalcoholic fatty liver disease.

The Center for Science in Public Interest classifies processed foods as foods that are manufactured or packaged and offered for sale to consumers with limited or no processing, meaning there’s very little you can do to change them.

And, as it turns out, processed foods have been linked to several digestive issues like stomach pain, gas, bloating, and constipation. Yuck!

If you struggle with digestive issues, it may be time to cut back on or eliminate your consumption of processed food.

Que:-What are examples of processed foods?

Ans:-Yes, pasta is processed food, it is considered a Moderately processed food. as according to some studies too much consumption of paste is bad for your health.